It is about motivation and competence 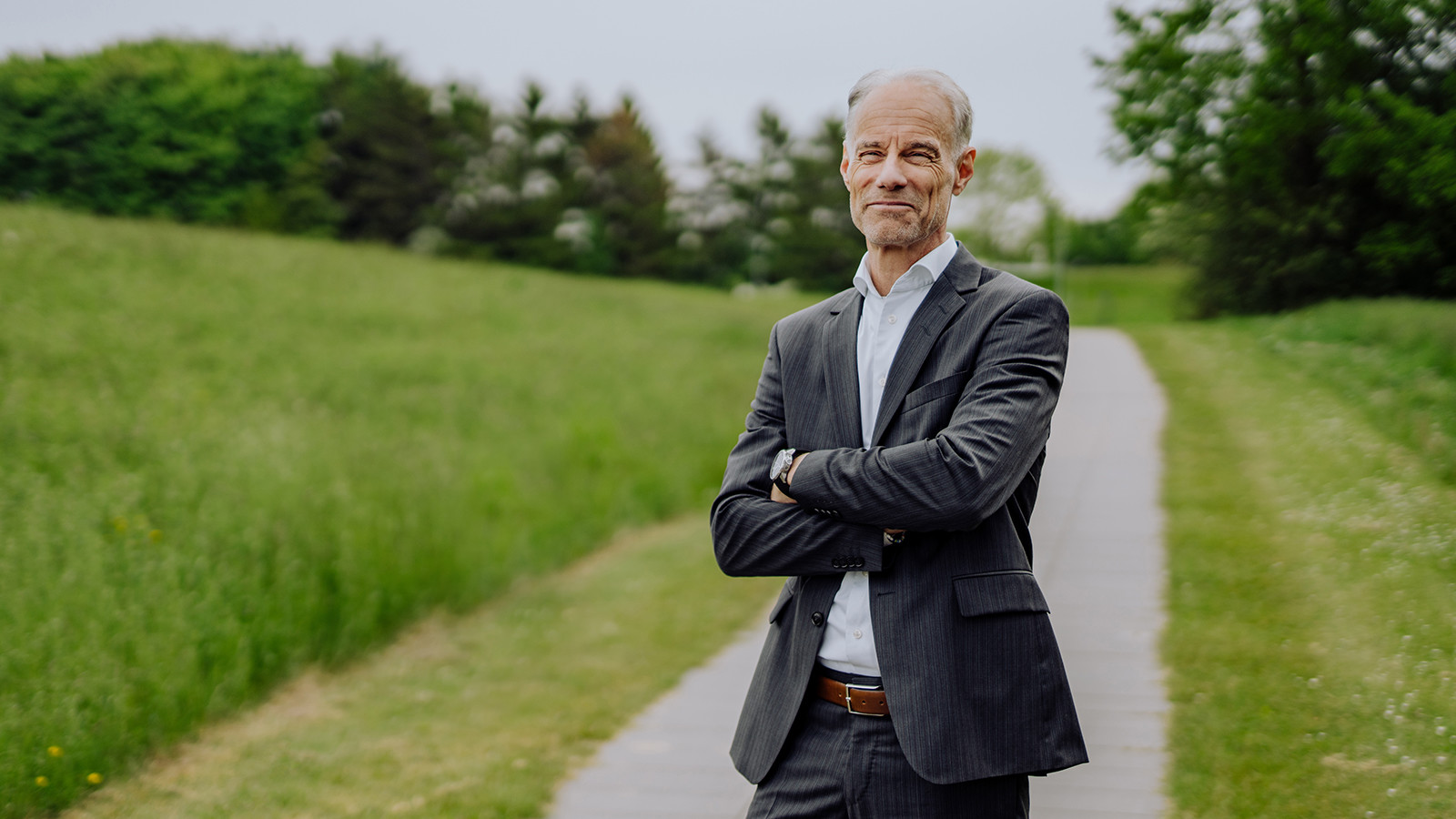 What are the qualities of a good team?

A good team sticks together and makes good decisions together. They stand together in good times and in bad times. A team consists of individualists, but the important thing is that you are there for KMD and work together.

In KMD’s Group Management you manage your own areas of course, but equally you manage KMD as a company. So, you have two jobs as a manager at KMD.

What about the composition of the team itself? What considerations do you have in this area?

It is important that the team consists of people with different backgrounds and perspectives – not only business-wise, but also personality-wise.

As a human being you adapt to the group you are a part of. When you are building a team, it is good to have people who complement each other. It is not just about gender and age, but also generally about personality and background.

The discussions in the team may well become longer and more complex, but they also become more dynamic. In my experience, the decisions that come out of those discussions are better.

So, a focus on diversity is important, but of course, ultimately, the competencies of the individual are crucial.

What are the most important management skills when it comes to getting results from your team?

For me, it is about motivation and competence. Motivation is an important driving force for the performance of organisations. When people are motivated, believe in what they do and work with the same goal in an organisation, it has a great strength. It is up to us as managers to facilitate this.

How do you motivate?

I believe in creating a positive image of where we are going together, but at the same time giving managers great freedom to manage their organisation or business. As an employee at KMD, you must feel that you want to be involved and have a role in our mission and the image we have of the future of the company.

It is also essential that you have an exciting job with a market-appropriate salary etc. But the most important thing is to want to be part of the future we have outlined for the company.

Can anyone become a manager?

Some are probably born to be leaders. Others, with education, can become relatively good leaders. Is management for everyone? Probably not. It’s also about interest. Many people are not interested. They would rather specialise in one field, and that’s perfectly fine.

I also believe that there are some qualities that you can benefit from as a leader. With a certain level of competency, you can certainly become an ok leader, but you may not become an excellent leader.

Can you manage a field, in which you yourself are not an expert?

Yes, to an extent. After all, there will be many others in the team or company who have the professional core competencies.

We have seen several good examples of top executives successfully leading companies. If I had to choose between a top executive with industry experience or a person with extensive management experience, I would choose the latter. But if I can get both, that’s wonderful.

Of course, there is also an aspect that is about what task you have in front of you as a top manager. Is it about very specific industry-related issues and deep transformation or more generally about optimisation and streamlining? For example, if you are about to establish new alliances with partners for the company or strong expansion in new areas, then you must have a significant understanding of the field you are working in.

How did you become a manager yourself?

I was in my late 20s, as far as I remember. And it was a bit of a coincidence but maybe also very classic. I was a reasonably successful financial advisor in wealth management and was put in charge of the entire team – not just myself.

Have you met a bad manager in your working life and what defined their poor management?

Many times, and for me it is often about hierarchical management or managers who cannot motivate.

In my younger years in banking and insurance, before I joined the IT industry, I experienced many managers who were very conservative, inflexible and hierarchical. You had to respect the hierarchy, and you were forced to refer everything to your boss. They were bosses who had an almost aristocratic approach to management, in which they were at the centre.

This can lead to an organisation in which employees are afraid to speak their own mind and the managers do not receive the right information. But those managers are definitely being talked about behind their backs.

It also creates uncertainty for employees, as you do not get information about what is going on in the organisation or feedback on your performance.

I decided early on that I would not take that approach. I do not need a very formal, prestigious approach to my management.

After all, it would be a disaster if people at KMD did not dare say things to me, or talked in the corridors about the flawed strategy I had laid out. We must not end up there as leaders. You don’t want to be ‘a laughing stock’.

Can you point to any good advice you were given as a manager when you were young?

“If you can’t tell it like it is, then at least don’t lie.” It is best if a boss describes things as they see them. There may be cases in which you cannot share things with the large group. But transparency and integrity are important if you want to be a credible, good manager.

If you could give one piece of advice to yourself as a young manager or other young leaders, what would it be?

You must believe in yourself.

I was about 40 before I found out I was doing okay. In my early years as a manager, I was worried that the others would soon discover that I was not skilled enough. But I was. It was just inside my own head that the thoughts were racing.

At first, I was the youngest manager in the management teams of some large organisations, and I had to spend several years working on how to live up to expectations and perform.

As a young person, I thought I should deliver extra because of my age, but a lot of it was something I was imposing on myself. I was a lot more critical than the people around me were. It was probably also due to a lack of feedback.

Later, I accepted that being wrong occasionally is acceptable. Everyone is. It is about being yourself and doing the best you can.

What is the hardest thing about being a manager?

It has to be the responsibility that comes with the role. Sometimes there are quite complex and major decisions that need to be made. It is about the money, but also about all the employees and customers who are involved. If it goes wrong, then it’s ultimately your responsibility. At least that is how I look at it.

Did the change from functional manager to CEO have an impact?

I was previously responsible for business units with more employees than KMD, but in most cases there was a European boss or CEO at the next level.

But, of course, being the CEO of the company is significant. You are responsible to the owners and the board. That’s a different role. But I have now been at KMD for just over a year, and I have taken it step-by-step and got more used to the tasks and what being the CEO of KMD means.

What is particularly exciting about being a CEO in a company?

The influence, but also being allowed to be in the room where decisions about the company are made. To be part of a group of talented people who are expert in their fields.

I am not driven by being the centre of attention but by being an active part of an exciting mission. However, being in the centre is part of the CEO role, and of course you have to accept that responsibility.

Has management changed since you first became a manager?

Yes, it is different today. It is much more about involving and delegating than it was when I became a manager. It has become less formal and more balanced. And that’s a good thing.

Being a manager today is just one role among many roles. Today the manager is no longer the focal point, where everything else is secondary. There are so many other roles that are at least as important to our success as a company.

The young generation is also in a different place today than we were when I was young. When I started, you came into a company and had to be trained in a completely different way. It was very “look and learn”. It is not at all like that today. It is not motivating for young people in the labour market. They come in with a lot of impressive new perspectives, and I think they should have responsibilities and exciting tasks from Day 1. This is how they grow and become even better.

What, do you think, will be important for management in the years to come?

I hope that we will find the positive balance between sitting at home and meeting together at work or meeting customers and partners. The flexible workplace is good, but the culture is very much created by meeting physically and being together. The culture is important for the unity of a company. It is not just about the professional meetings but also about everything that happens between meetings and the more informal things.

I am not sure where the balance lies. We must not be conservative in our approach, but we must be aware that being together as human beings matters – also at work.

What will be the most important thing for you as CEO of KMD going forward – especially in relation to culture and employees?

There are several things, but one of them is that we continue to remember not only to talk about financial figures and goals. Numbers are of course important for a company, but articulating the softer, more qualitative areas is also important. Especially where we are heading and why.

It is also about everyone being able to see that something is happening in terms of the development we are talking about. Especially in relation to the growth and performance strategy. We must not only talk. We must also show that there is action behind the words. This is important for managers at all levels.